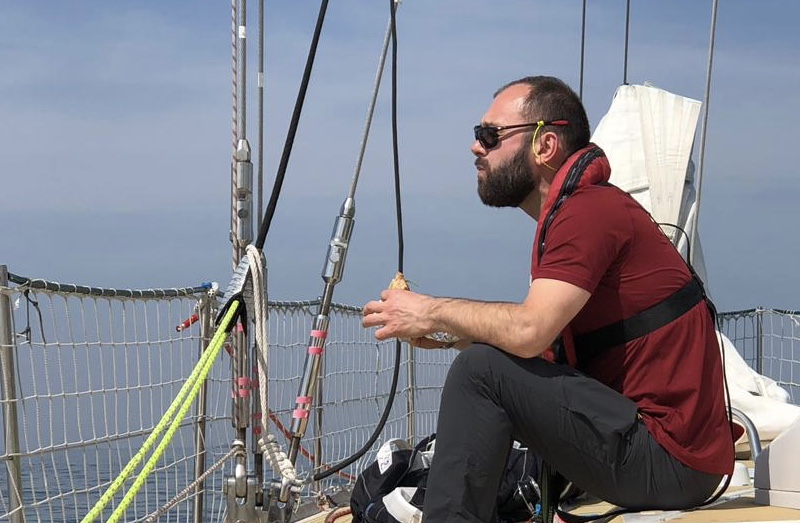 Categories:EuropeTraining
by Ian Griffiths |
on April 27, 2019

Level III – punctuated by a mid-channel rescue, a grounding (not ours), blowing the spinnaker in a F2 (… yes this is possible), and an awakening to hot-sauce thanks to a cultural exchange over breakfast – all sailing offshore.

The week starts off with a day in the classroom to nail down more ‘what-if’s’ when sailing offshore and the nearest civilisation could be 2,000 nm away. Pretty hard for any presenter to keep a bunch of highly-energised, motivated, over-enthusiastic trainees tethered for long in a classroom with no air. He did what he could but we all busted out as soon as the words ‘any questions?’ were uttered. It was all we could do inot to breakdown the door in the stampede to get bunked and kit unpacked!

After more offshore safety briefings than you could shake a stick at. We slipped lines and headed out to open water in a F3-4 with no swell to speak of… nice!

No sooner had we hoisted the main-sail, skipper (Chris), a veteran 17/18 campaigner received the PAN-PAN that fellow 70’ Clipper had randomly picked up a discarded floating line in the prop and couldn’t start the engine for fear of ripping out the gearbox. So, down came everything and we coordinated to come alongside and set-up a tow.

There’s a first time for everything, and having x2 30-tonne plus sailboats tied together was going to be interesting. This was not a drill. Ferry boats were kicking up the biggest wakes they could and buzzed pretty close – I think it was something out of the ordinary for those guys; and they certainly don’t go out of their way to make things easier. A kind of sport for them, I guess. Anyway, we all thanked them profusely!!

The next challenge was that the tide was reaching low-water, both boats draft around 3m+ and it gets pretty shallow outside the marina entrance. Also, Sir Robin Knox-Johnston was about to depart for Falmouth to celebrate his 50th year round the world anniversary with the world’s media, so, grounding was not an option.

Thankfully, the silty mud-gods were happy to release us. Others were not so lucky!

Well after our 4th MoB (man-overboard) and umpteenth spinnaker hoist the wind-seeker kite decided to get caught on a sharp edge of a nav-light and skreeeeegh – the sound of a tearing sail! Oh &^it!

How the hell did that happen?? There was virtually no-wind and some how…. whaaat?!! I know what happened…

I reckon Captain Won’t Wash had something to do with it – he’s looking too smug! Was it him who booby-trapped the spinnaker?