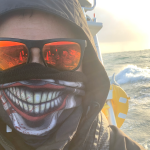 It’s mid-March 2019 and Sir Robin Knox-Johnston‘s team at the Clipper Race have just announced who the successful skippers are for the 2019-2020 race evolution. As one of my crewmate cousins from the states in level 1 training, says …

The Clipper Race skipper selection process is super rigorous and demands that each skipper (captain of the vessel) not only has the necessary ocean-fairing skill-set to command a performance but has the equally hard-to-acquire people-skills necessary to sustain the moral and operating safety of a diverse bunch of amateur crew like us.

Crew allocation is scheduled for 11th May. At this next milestone, most of the crew-training should have been completed (75%). I’ve got level 3 training in mid-April, which will be done on the 70 footers (referring to the boat size).

Up to now, we’ve been on the older/heavier 68’s. These older boats are a bit like comparing a MkIV Range Rover compared to a factory works WRC Rally car – the 68’s can take a beating but aren’t as race-tuned as the .

In May we get to know who you’ll be racing with – fellow teammates and skipper! While writing this blog, I’m starting to get butterflies just thinking about it.

So far, while we are all learning the ropes – training crewmates have all been brilliant fun and super supportive. It’s truly amazing to be part of a team of like-minded people from all walks of life (sometimes countries). There’s so much to learn with a boat this size. Typically, there x4-5 times the number of winches to manage x10 times the amount of sail area when compared to a typical 30-40′ cruising sailboat. The size, the scale and the forces involved the require boat handling sequences to be broken down to a component level so that no one part of the process gets over-powered. This means teamwork and communications is absolutely essential.

It’s so rewarding when all the component parts come together, and you pull off a sweet manoeuvre. When the whole crew works the systems in synch like a well-choreographed dance troop.

In my 20’s, I used to play a lot of golf and tennis. is the singularly most frustrating sport on the planet (in my opinion) – but that’s for another day! Anyhow, pulling off a sweet manoeuvre on the boat has a similar feeling to when you connect perfectly with the sweet spot of your club or racket and you knock it out of the park!

In sailing, you can usually tell when you pulled off a good tack, gybe or racing sail change – when the skipper or helm (person steering) is grinning from ear to ear.

Btw – there’s a useful glossary of terms if you’re new to this game.

If you want to learn more about Sailingoffshore with Clipper Around the World Yacht Race – click here.